More than 30 different diseases are identified as neurological movement disorders. These disorders, which include Parkinson’s disease, essential tremor, dystonia, tardive dyskinesia, restless legs syndrome, Huntington’s disease, and spasticity, range from mild to severe. While symptoms vary widely, the disorders are often progressive, and increase in severity over time.

Nearly 40 million people in the U.S. have a movement disorder of some type. Most movement disorders are not curable, although treatment may slow or decrease symptoms. People with movement disorders can experience involuntary movement such as tremor, abnormal posture, slowness, walking difficulty, and stiffness due to neurological conditions.

In addition to clinical practice, Dr. Ellenbogen is actively involved in clinical research and clinical trials. He is an active member of the Parkinson’s Study Group, Restless Legs Study Group, International Neurotoxin Association, and the Movement Disorders Society, among other groups. Because of his training and experience as a movement disorder specialist, Dr. Ellenbogen is best equipped to tailor a plan of care for patients with one of these conditions.

Some people may wait to see a movement disorder specialist until later in their disease course. However, seeing this specialist early in your treatment could help you devise a treatment strategy, plan for your care in the future, prepare for potential changes in your Parkinson’s and adapt to these changes as they happen. Dr. Ellenbogen also can connect you with clinical studies to help develop better treatments for your condition.

While many movement disorders are not life threatening, they can have a significant impact on a person’s ability to function and independence. Depression, anxiety, and cognitive problems often coexist. In addition, abnormal posture or movement may result in severe pain.

Treatments offered at MIND’s Parkinson’s and Movement Disorders Center include management of medications used to slow or decrease symptoms, botulinum toxin injections, referral for physical and occupational therapy and surgical recommendation for procedures such as deep brain stimulation (DBS) that are used to control motor symptoms. We can offer an appointment with our movement disorders team in the next two weeks. Contact us here to make an appointment. 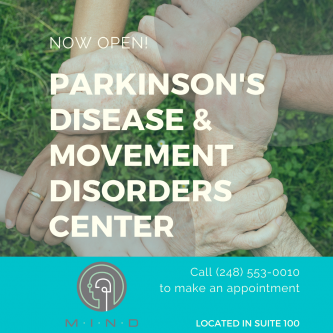